Fever of unknown origin with polyarthritis

We describe a 14 years old male child presented with since 5 days of fever, polyarthritis and Salmon colored rash. For almost a century, this disorder is first recognized by George Frederic Still.

We describe a 14-year-old male child presented with since 5 days of fever, polyarthritis and Salmon colored rash. For almost a century, this disorder is first recognized by George Frederic Still. 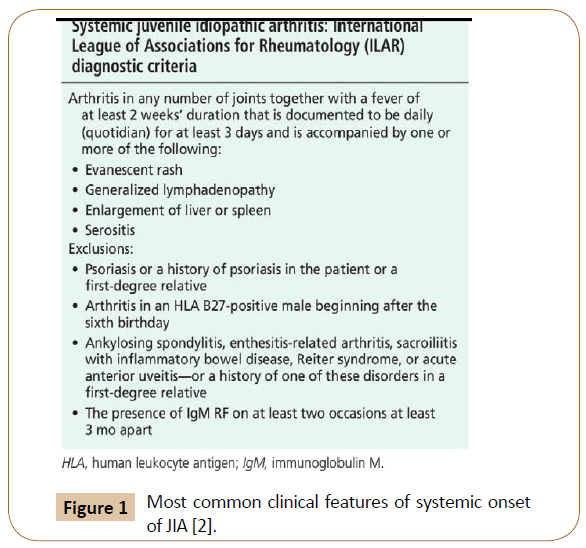 Figure 1: Most common clinical features of systemic onset of JIA [2].

The patient complained of pain in the throat since 5 days, skin rash and fever up to 39°C with since 3 days pain and swelling in the wrist and ankles. Physical examination showed a child with normal vital signs. He was alert, good oriented in time/ space and person. He had diffuse spread over his whole body salmon colored erythematous rash since 5 days (disappeared during admission after 6 days). ENT examination revealed red throat, Lymph nodules not enlarged. The lungs were clear to auscultation. There was no evidence of hepato-splenomegaly. Left knee painful at extension, not warmer than right knee, no swelling and painful wrists with limited movement [1-10]. 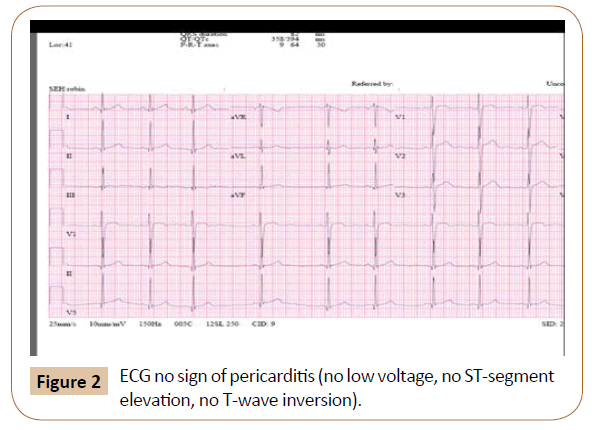 Figure 2: ECG no sign of pericarditis (no low voltage, no ST-segment elevation, no T-wave inversion).

Note: Several diagnostic criteria have been proposed, Yamaguchi’s and Fautrel’s criteria being the most employed. For a discussion about the different criteria, see Mahroum N. et al., J. Autoimmunity 48-49:34-37, 2014.

This case study described a 14-year-old child with persistent fever since two weeks, rash, and polyarthritis. The onset of the disease with features of recurrent fever and polyarthritis is nonspecific and may suggest bacterial or viral infection, malignancy, or another inflammatory disease. The most common clinical features in 136 children with systemic-onset JRA were fever (98%), arthritis (88%) and rash (81%). Only 39% had lymphadenopathy, 10% had pericarditis, and fewer had hepato-splenomegaly [15]. Patient in our case had the required criteria for the diagnosis of systemic arthritis by the ILAR criteria. (Fever of at least 2 weeks duration plus typical rash). Criteria and exclusions are shown in Tables 2 and 3 [2-8,19-27]. The clinical features are similar to Adult onset Still's disease [28-33]. When we compare our case of systemic onset JIA with Adult onset Still’s disease criteria, than we come to conclusion that the required criteria for Diagnosis of Still disease is similar. Child described in our case has 5 major criteria (fever >39 longer than 1 week, arthritis, salmon colored rash, leukocytosis >10.000, with >80% neutrophils) and one minor criteria (negative Rheumatoid Factor and ANA) according to Yamaguchi. Our case had 3 major criteria and one minor criterion according to Fautrel. See for ILAR criteria (Table 1) and for criteria of Yamaguchi and Fautrel (Table 2) [2-8]. The possibility of a childhood vasculitis or malignancy is excluded by radiological investigations and other clinical investigations. These exclusion criteria are also named in ILAR criteria and criteria for Still’s disease.

This case shows that not the presence of the clinical evident features in the onset but the evolution of the disease eventually made the diagnosis of systemic onset juvenile idiopathic arthritis. About 40% of the children with systemic JIA follow a monocyclic disease course and eventually recover almost completely, after a variable period. A small proportion of children have a polycyclic course characterized by recurrent episodes of active disease interrupted by periods of remission without medications. Studies have shown that more than one-half of the children with systemic JIA have a persistent disease course which has resulted in progressive involvement of more and more joints and moderate to severe functional disability [16].

The most important early predictors of destructive arthritis are polyarthritis, thrombocytosis, persistent fever, or the need for systemic corticosteroids in the first 6 months after disease onset [17,18,34-39].

Treatment consisted in this case of NSAIDs. Patient received high dose Naproxen. Because of side effect is NSAID switched to Indometacine retard 75 mg. With NSAID is used both to aid in control of the systemic inflammatory features (e.g., fever) and to modulate joint pain and inflammation. Because systemic features seldom respond satisfactorily to NSAIDs alone, if the diagnosis is firmly established, the early use of glucocorticoids is indicated. Intravenous methylprednisolone (30 mg/kg/day to a maximum of 1 g/day on 1 to 3 consecutive days) is effective in controlling systemic and articular features of the disease, but the effect is often short-lived. Therefore, oral prednisone (1 to 2 mg/kg/ day to a maximum of 60 mg/day in one or more doses) is often necessary. Disease-modifying anti-rheumatic drugs have been traditionally used in patients with s-JIA, with the goal of sparing glucocorticoids, but their efficacy is usually limited. Although most of the evidence is provided by uncontrolled studies, biologic agents that inhibit the three pivotal inflammatory cytokines (TNF, IL-1 and IL-6) have already changed the approach to the treatment of s-JIA [40-45]. The role of especially IL-1 in the pathogenesis of s-JIA and predictors of response to IL-1 inhibition has been studied [22-25,44].

Abnormal expression of three of the most important proinflammatory cytokines-interleukin-6 (lL-6), IL-1, and tumor necrosis factor-a (TNF-a)-is characteristic of systemic JIA. De Benedetti and Martini [33] suggested that systemic JIA is an IL-6-mediated disease. Evidence to support that hypothesis is strong. IL-6 is markedly elevated in the blood and synovial fluid. [34-36] The IL-6 level increases just before each fever spike and correlates with the systemic activity of the disease, arthritis, and increase in acute phase reactants [37-41]. The abnormalities in regulation of IL-6 are also probably responsible for the limitation of growth, thrombocytosis and microcytic anemia seen in this disease [39,40].

There is accumulating evidence that inhibition of IL-1 or IL-6 is highly efficacious in a significant number of patients with persistent s-JIA, with improvements seen in both systemic symptoms and arthritis [19-21,26,28]. The long-term benefits of these approaches still need to be determined. One of the complications of systemic onset juvenile arthritis is macrophage activation syndrome (MAS). MAS bears close resemblance to secondary hemophagocytic lympho-histiocytosis (HLH) and is associated with serious morbidity and sometimes Death [29,30,46-49]. Other complication of systemic onset JIA is secondary amyloidosis. The outcome of JIA-associated amyloidosis in the Finnish series was also poor, with a mortality rate of 42% and renal insufficiency or renal transplantation required in 25% of survivors, after a mean follow-up of 15 years [32]. Autonomous stem cell transplantation for systemic onset JIA can be a future remedy. There have been studies in the past [46-50].