We report a 3-year-old boy with complaints of intermittent vomiting for two weeks. Careful evaluation with urine drug screen, MRI, and CT revealed cocaine intoxication and left parietal intraparenchymal hemorrhage. The risks and benefits of anesthesia for a pediatric patient with cocaine intoxication were weighed and the patient underwent left parietal craniotomy with evacuation of intraparenchymal hemorrhage and biopsy of tissue.

Intracerebral haemorrhage (ICH) is a type of stroke caused due to deprivation of blood and oxygen in the brain. Here is presented a case of acute cocaine intoxication and concomitant intracerebral hemorrhage in a 3-year-old boy. This case underscores the need for careful evaluation for substance abuse and ingestions in children with altered mental status and/or chronic vomiting. It also suggests that MRI and magnetic resonance angiography (MRA) can also be used to identify ICH and can also be used to identify an underlying cause of the hemorrhage.

A 3-year-old boy with a history of neonatal abstinence syndrome presented to our Emergency Center (EC) with a twoweek history of intermittent vomiting. He had been at another facility three times over the course of the past two weeks for the vomiting and was discharged home each time with Zofran (ondansetron) and a diagnosis of viral gastroenteritis. On examination, the patient was lethargic and mydriasis was noted. He was found to have a rapid, irregular heart rate, ranging from 50 bpm to 150 bpm, with extra beats. During his evaluation, the patient was found to have a blood pressure of 155/106 with a mean arterial pressure of 112 meeting malignant hypertension criteria and placing him at risk for serious end-organ damage. An electrocardiogram (EKG) revealed sinus rhythm with marked sinus arrhythmia and borderline prolonged QT interval. During the episodes of hypertension where mean arterial pressures reached 112, STwave depressions were seen on telemetry. A complete blood count (CBC) demonstrated leukocytosis and a urine drug screen (UDS) was positive for cocaine. A computed tomography (CT) scan demonstrated a hemorrhagic lesion in the left posterior hemisphere with vasogenic edema. A subsequent magnetic resonance imaging (MRI) scan showed left posterior cerebral hemorrhage with a bilobed appearance suggestive of perhaps two episodes of hemorrhage (Figure 1). 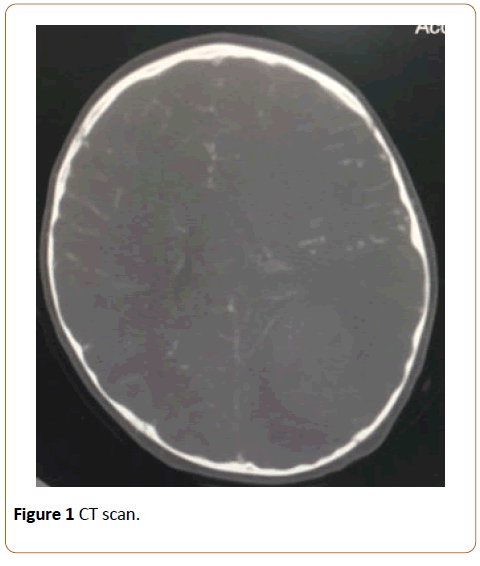 The neurosurgery department was consulted and recommended an intravenous (IV) bolus of Decadron (dexamethasone) for edema, Keppra (levetiracetam) for seizure prophylaxis, and maintenance of serum sodium greater than 145. When the patient became hypertensive, cardiology was consulted but had no recommendations due to lack of experience/knowledge in regards to this unique situation. The patient was admitted to the Pediatric Intensive Care Unit (PICU) for continued observation and management. After further discussion and imaging review with the neurosurgeons, it was determined that the patient would benefit from a left parietal craniotomy with evacuation of intraparenchymal hemorrhage and biopsy of tissue. After reviewing the risks of anesthesia for a cocaine intoxicated patient, it was decided that general anesthesia via endotracheal intubation with hyperventilation would hold the least risk for the patient. The risks were discussed with the family who were in agreement with the plan of care. The patient tolerated the procedure well and there were no intraoperative complications reported. The patient was continued on Decadron, Keppra, and hydralazine. The patient remained stable in the PICU and was discharged on postoperative day 7 with a prescription for Keppra. No complications were seen during the postoperative period and the patient’s clinical symptoms resolved following the procedure.

However, the patient returned to our EC six weeks later with complaints of acute onset headache upon waking and vomiting. He was provided with Zofran for nausea and vomiting in the EC and his headache resolved without intervention. MRI of the brain demonstrated a stable evacuated clot cavity with increased edema surrounding the clot cavity. The patient was admitted for observation. Neurosurgery and radiology decided that there was no indication for an angiogram at that time and the patient was discharged. The patient is seen monthly by neurosurgery and has remained stable. Repeat MRI scans suggest resolving edema and no further intracranial hemorrhage or pathology.

The management of a pediatric patient who presents with intracerebral hemorrhage (ICH) associated with acute cocaine toxicity is not well researched at this time. It is important to note that the management of these patients must be evaluated on a case-by-case basis, as there are many factors that may affect proper management. Research in adults has demonstrated that cocaine-positive patients not only present with more severe ICH (severity determined by NIHSS), but also that patients with cocaine-associated ICH are more likely to die during their acute hospital stay [1]. It can be assumed that these correlations would be the same or similar in acute cocaine intoxication in the pediatric population. This case underscores the need for careful evaluation for substance abuse and ingestions in children with altered mental status and/or chronic vomiting. Abuse and ingestion may not only affect treatment and anesthetic agents used, but also the outcome based on the choice of the medications.

In 2014, researchers developed the Pediatric Intracerebral Hemorrhage Score to be ultimately used for risk stratification, clinical decision making, and research. This scale, based off of the ICH scoring system used in adults, takes into account ICH volume, acute hydrocephalus, herniation, and infratentorial location. The patient is assigned points based off of these characteristics and is given a score from 0-5. This scale can be used to help predict level of disability that may been seen in the pediatric ICH patient [2]. The factors used to create this scale can all be assessed by CT scan or MRI. Due to the wide availability and speed of CT, CT scans of the brain have become the initial diagnostic test of choice in pediatric patients with suspected ICH [3]. Studies suggest that MRI and magnetic resonance angiography (MRA) can also be used to identify ICH and can also be used to identify an underlying cause of the hemorrhage [4].

The mechanism by which cocaine intoxication leads to ICH in both children and adults is unknown. Research suggests that hypertension, with or without underlying vascular anomalies, may contribute to cocaine-associated ICH. This has been evidenced by consistently high admission blood pressures as well as lesion locations [1]. It has been shown that cocaine not only causes increased thromboxane production, but also changes the physiological effects of catecholamines thereby potentiating vasospasm and ischemia. It is postulated that cocaine induced vasospasm is more intense and of longer duration than a non-cocaine induced vasospasm [5].

Additionally, there is also a high correlation between cocaine use and seizure activity. It is thought that the interaction between cocaine and GABAergic and glutamatergic systems leads to a decreased seizure threshold [6]. Seizures occur in less than 20% of adult patients with ICH but are more common with lobar hemorrhages. Though seizures following ICH have not been associated with worsened clinical outcomes, it has been shown that prophylactic antiepileptic drugs significantly reduce the number of clinical seizures in patients with lobar ICH [7]. For this reason, the patient was started on Keppra for seizure prophylaxis.

The most serious issue encountered during this specific case, was the safety of anesthesia for a pediatric patient with an ICH who was acutely intoxicated with cocaine. ICH innately leads to hemodynamic instability in any patient. The acute cocaine intoxication complicates the situation by causing hypertension and potentially fatal arrhythmias. Even in a healthy child, cocaine toxicity puts the patient at risk for acute coronary syndrome and death. Several studies have suggested that patients who chronically abuse cocaine, but are not acutely intoxicated at the time of surgery, have similar outcomes to patients who do not chronically abuse illicit drugs.8 However, induction of general anesthesia in the acutely intoxicated patient has not been well studied. It is postulated that general anesthesia in the acutely intoxicated patient increases the risk of cardiac arrhythmias in the patient regardless of cardiac history. It is thought that cocaine’s effects on cation channel blockade lengthens the duration of both QRS and QTc intervals and induces potentially fatal cardiac arrhythmias [8]. For this reason, the patient described above was maintained at a serum sodium level greater than 145.

Research regarding the anesthesia of cocaine-dependent neurosurgical patients suggests that preoperative benzodiazepines can reduce hemodynamic instability as well as provide anxiolysis and sedation. In adults, dexmedetomidine has been shown to provide sedative and analgesic effects in this specific cohort [9]. Though this medication is not yet FDA approved for any pediatric uses, research suggests that further investigation into this medication for pediatric patients may show promise in relevant areas such as prevention of emergence delirium following anesthesia, sedation in the pediatric ICU, procedural sedation, and treatment of withdrawal [10].

In the case described above, it was determined that the potential long-term effects of increased intracranial pressure due to ICH were of higher risk than those of general anesthesia in this three-year-old with acute cocaine toxicity and so the surgery was performed one day after the patient presented to the EC. Though half-life of cocaine is relatively short (19 to 168 minutes), in this case we did not know the time or amount of ingestion [11]. For these reasons, it was decided that waiting one day to perform the surgery would allow the cocaine to mostly be eliminated from the patient’s system and therefore decrease surgical risk. The risks of this emergent surgery were reviewed with the patient’s guardians and the anesthesiologists were prepared with medications and equipment to manage the patient throughout the case and treat in the setting of an adverse event.